A Veritable Decathlon of Sports Films

Posted on August 23, 2012 by Kirsty
Guest post by Jonathan Eyers 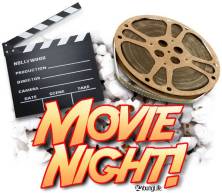 Good sports movies are few and far between. For every Caddyshack there are a dozen Mike Bassett: England Managers. But they do keep churning them out. In the last ten years there have been no fewer than three table tennis movies, and a glut of lacrosse movies too. On the flipside, it’s high time for another bowls movie, because it’s been a decade since the last one. Whilst we’re waiting for that one, here’s a rundown of what must surely rank as the top ten greatest sports-related movies of all time. So incontrovertible is this list, in fact, that we might not even bother to leave the comments open at the end.

In A Beautiful Mind the voices tell Russell Crowe that he can break Soviet encryption codes and he gets committed for it. In Field of Dreams the voices tell Kevin Costner to build a baseball field and everybody just goes along with it. It’s hard not to be cynical about a movie that ends with you introducing your dead dad to your kids before running off to play catch with his ghost.

Such a splendidly triumphant movie about complete and utter failure that when it first came out the Daily Mail review supposedly questioned whether British bobsledders had been changed into Jamaicans (because of political correctness, of course). And yes, everyone misses John Candy, but what would he be doing if he was still around? He’d have had a gastric band inserted and married Lindsay Lohan, that’s what.

Nick Hornby’s novel was filmed twice within the space of ten years, one starring rent-a-drip (sorry, rent-a-dripping-shirt) Colin Firth, about Arsenal doing all right in the late 80s, and the other starring some American, about the Boston Red Sox. A baseball team. It is directed by the geniuses behind Dumb and Dumber, with a script written by a man whose pen name is Babaloo. Stick with the British version. 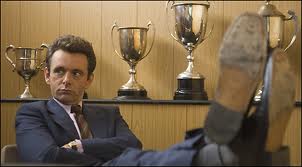 Shockingly, Michael Sheen doesn’t play Tony Blair for the fourth (fifth?) time in this fictionalised version of Brian Clough’s time at Leeds United in the mid Seventies. He spends most of his time attacking his own team, his own team spend most of the time attacking him, and then he gets booted out. Actually, maybe Sheen is playing Blair again after all.

Slightly less plausible than Field of Dreams, this one sees Tom Cruise’s agent develop a conscience and walk out of his lucrative career because he doesn’t like how big business has corrupted sport. He’s followed by a desperate single mother with a weird-faced kid and they all go on to make millions of dollars for Cuba Gooding Jr. But this money is good money, unlike the other money, which was bad money. You had me at vomit.

Watching many of Martin Scorsese’s films feels like being punched in the head for three hours, so here you can enjoy a little postmodern thumping watching Robert de Niro bleed in glorious black and white instead. 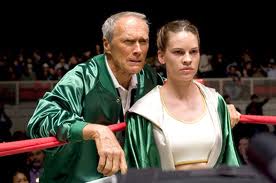 Clint Eastwood not only produced, directed, starred and wrote the music for this bleak boxing drama, he also made the sandwiches for everyone on set. Nice guy. He’s not in the sequel, which got released direct to DVD and starred Angela Lansbury and Dick van Dyke as two amateur detectives (one a writer, the other a doctor) who get together to investigate the murder of a young female boxer. They pin it on Morgan Freeman, but he’s not in it either.

Followed by more sequels than Friday the 13th (Rocky 7 will apparently see a reincarnated half-cyborg version of Signor Balboa going up against killer boxing robots on a space station in the far future too), it’s often easy to forget the original was classic feel-good schlock for men. Apparently Adrian was originally going to be played by Dustin Hoffman.

Rowan Atkinson’s interpretation aside, the famous Vangelis theme is now hated by everyone who had to go to the London Olympics and got stuck behind someone who thought they were not only being very funny but also highly original when they started walking in slow motion whenever the theme started being piped over the loudspeakers. That doesn’t detract from the film, however, which is protected by a law banning dislike of it throughout England and Scotland. 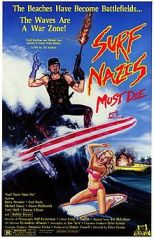 Good surfing films are rare, so this luminous assault on the modernist idea of the city, depicting what happens along the Californian coast after a major earthquake, is an underrated classic. It’s also a poignant allegory for the rise of the Third Reich as prescient as Brecht’s Arturo Ui. Critics are divided over whether the bereaved grandmother who escapes her nursing home to seek revenge on the Surf Nazis with guns and hand grenades represents a complacent British Empire or isolationist America. Perhaps it is testament to the film’s depths that it can be seen to represent both.

This is a guest post and views expressed here are entirely of the author, and can largely be considered tongue-in-cheek.