With Wimbledon now over, and Britain’s Andy Murray declared the winner of the coveted golden trophy, I wanted to look back to the very beginning, and relive the events that occurred on Court 1 on the 24th July.

Two weeks ago I finally got my day at Wimbledon, day one of The Championship on Court 1, and what a day it was. 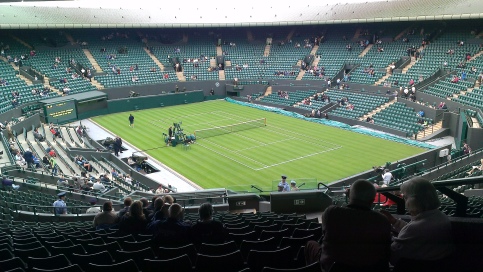 The weather on the morning was not great and rain is always a possibility in the British climate, even when the sun is shining. So with sun cream, umbrella, blanket and picnic packed we headed off to Wimbledon.

After familiarizing ourselves with the club and most importantly getting our free voucher for strawberries and cream (finally, a benefit to being an HSBC customer) we made our way to our seats.

First on court was Victoria Azarenka vs. Maria Koehler. This was the match I was looking forward to least – Azarenka’s war cry starts to grate on most people after a while. There were some good points in the women’s game, but Azarenka dominated from the start, and her opponent did not put up much of a fight. However, this match did have some drama. Part way through the second set Azarenka let out an almighty scream and the crowd gave a collective gasp of shock. Azarenka was down, one slightly skewed turn and she twisted her knee. While she did go onto win the match, she was limping around the court. Her opponent should have used that to her advantage and sent her running, but she didn’t. The next day Azarenka pulled out; her competition was at an end.

The tennis was fantastic from the start. As Darcis took the lead in the first set, everyone was incredulous; we were fully expecting Nadal to win in straight sets. Credit to both players, Nadal was not playing poorly at all – admittedly nowhere near his best, but you do not expect that in the first round of a tournament. Darcis was just playing better, he was getting the crucial points and he was playing as though he had nothing to loose. Okay, we thought, Nadal has lost the first set. That’s nothing. He has come back from far worse situations.

I found myself cheering on Darcis, the pluckiness and the style with which he was wearing down Nadal was just too good to not roar in delight at. When he took the second set, the crowd was in a state of disbelief. But still, Nadal has come back from 2 sets down many a time. No one was putting him out of the tournament until match point was won! But Darcis kept going, he was unstoppable; where many unseeded players might crumble under the pressure of serving out a match against a player such as Nadal, Darcis did not flinch. When the final point was played, only then did the crowd accept Nadal’s loss, and they went wild. I did feel sorry for Nadal, he looked very forlorn as he walked off the court to face a pounding from the press about his injury and tennis future. Darcis of course was jumping for joy, and rightly so; he had pulled off the biggest upset of the tournament.

I was sad when Darcis pulled out the next day due to a shoulder injury; I wanted to know how he would progress. Would he be a one hit wonder like so many unseeded players that knock out the greats?

Next up on court was former Wimbledon champion Lleyton Hewitt vs. 10th seed Stanilas Wawrinka. This was expected to be THE match of the day. Hewitt’s career has been plagued by injury, but he still has so much grit and determination left in him. He is a joy to watch, and after reaching the semi-final at Queen’s the previous week, he was definitely on top form. Wawrinka is another fabulous player, with one of the best single-handed backhands on the tour.

After the epic match we had just been treated to, I honestly felt exhausted, and I think the crowd felt the same. It was as though the energy had been sapped out of the stadium, and while the next two players were rushed on, I think the crowd was only half paying attention for the first thirty minutes. Hewitt was having absolutely none of that; always a crowd pleaser, he was revving up his audience. He had his own little group of Australian fans dressed up and ready with rehearsed chants to egg their hero on. Hewitt loved it.

Wawrinka was the favorite to win this match, as the highest seed, but that meant nothing to a crowd who had just watched Nadal get knocked out by ‘a nobody’. Hewitt is very far from ‘a nobody’, so it could swing either way. From the beginning of the match Wawrinka didn’t seem to be there. He was making many unforced errors and his famous backhand was failing to live up to expectations. Hewitt of course took advantage of this and battered down his opponent. By the end of the first set the crowd was in full swing, and I can say the majority were definitely supporting the old Wimbledon hero. It was majestic to watch, Wawrinka upped his game a lot in the 2nd and 3rd set, but it was just not enough. Hewitt was being carried along by the crowd, and loving every second of it. When he won I was left feeling all warm and bubbly inside. The BBC website ended its Wimbledon commentary with a quote I thought perfectly described the feeling in the stands: ‘As the sun sets on the first day of The Championships, an old Wimbledon flame burns bright’. As I left, my vision was clouded with idealism – I could see him going all the way.

Two days later Hewitt’s dream was over. That meant that all 6 players we had seen that day were now out. A small superstitious part of me worried that we had jinxed the players. But really it just goes to show that nothing in tennis, or sport, can be taken for granted. This year has been the year of shock exits, with Federer going out in the second round and Serena Williams in the fourth. They were preceded by an array of injury drop-outs from some of the best players, including Tsonga and Cilic. These top players know that they cannot take anything for granted so they take care of their bodies and they will all be back next year, stronger than ever, I am sure.

So this year we celebrate two brand new Wimbledon winners, Marion Bartoli and Andy Murray; let us hope they both go on to win many more titles.