Velvet smoothness
The rider known as Il Campionissimo (champion of champions), Fausto Coppi, in full flight during the 1949 Tour, the first of his two victories. Coppi was arguably the first ‘modern’ cyclist, and, as far as some are concerned, the ultimate stylist. He and his great rival, Gino Bartali, scored an Italian one-two in this Tour, with ‘Il Pio’ (the pious), second. 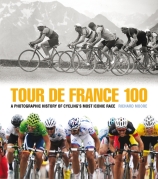