The Rugby World Cup – a history in photos. Out now!

Unless you’ve been stuck in a blizzard in Siberia, you’ll know that one of the world’s greatest sports events is happening right now!

The Rugby World Cup 2015 has already been pronounced as the greatest edition of the tournament, breaking records in ticket sales, TV audiences, commercial revenue and social media interaction. (I even got to be part of the record-breaking 89,267-strong crowd at Sunday’s Ireland-Romania clash – woo!) And RWC 2015 has also featured a plethora of the world’s most magnificent beards – even Prince Harry was sporting one at the opening ceremony! 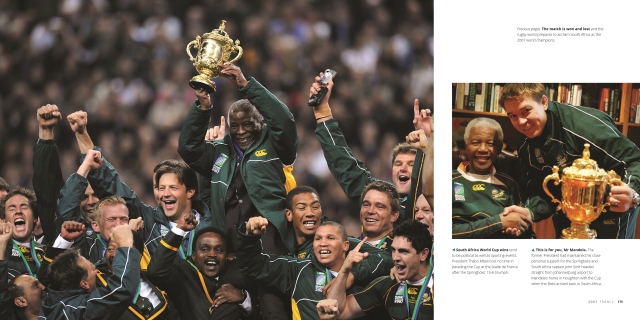 But what do you know about the history of this great test of human strength, aggression, speed and endurance? Starting with the inaugural competition in 1987 – in which New Zealand confirmed their status as the world’s top rugby nation – to the historical 1995 Rugby World Cup in South Africa after the end of apartheid and the international sports boycott through England’s fantastic win in 2003 breaking the southern hemisphere’s dominance, up to this year’s qualifiers, The Rugby World Cup is a unique photographic journey through each tournament. So why not get your hands on a copy.

It isn’t just the All Blacks who do the haka. Come on Tonga!

The Rugby World Cup: The Definitive Photographic History by Brendan Gallagher.   Get 30% this book and all our other rugby titles on our website.