The bronze statue erected without huge fanfare at Liverpool’s Anfield stadium a few weeks back does not immediately project its subject as one of football’s greatest managers.

He, Bob Paisley, is depicted in his old Gola tracksuit, carrying one of Liverpool’s players on his back. His brow is creased with the weight on his shoulders – Emlyn Hughes, bearing a gash to his left leg. He stares into the middle ground as he trudges off the Anfield pitch.

When a statue to Liverpool’s most famous manager, Bill Shankly, was erected in 1997, it captured the proselytising Scot in a familiar pose, taking applause from his adoring fans. Paisley had not even succeeded Shankly when the scene which his own statue depicts took place. He was merely ‘the trainer’.

There is something immensely fitting about that. Paisley was always embarrassed by a fuss. On one of the very few occasions when he took applause from Anfield’s Kop – his last home game as manager, against Aston Villa in 1982 – he had to be shoved out in their direction by Graeme Souness, the last of his captains.

Paisley was, to coin the title of my biography of him, a Quiet Genius. What he lacked in the powers of oration commanded by the firebrand Shankly, he more than made up for in qualities of delegation, collegiality and a profound capacity to listen. ‘If you want to tell anybody anything, speak softly,’ Paisley once said. ‘You’ll find they’re trying to listen to you.’

Others stood on his shoulders, you might say. And so it seems wholly appropriate that the image Liverpool chief executive Peter Moore felt passionately that the statue should be modelled on was that Emlyn Hughes scene, which dates from a home game against Tottenham Hotspur in 1968.

It says everything about Paisley that he never considered the moment or the image to have been iconic. He never seems to have considered it at all. Not once in his interviews and reflections on the game did he reference it. Neither does it crop up in the autobiography of Hughes, who went on to be Paisley’s first captain, lifting the European Cup on a balmy Rome night in 1977.

The statue has arrived somewhat belatedly. I reflected in the preface to Quiet Genius, three years ago, that the absence of one by that time was a travesty. Paisley may have been far less of a box office manager than Shankly but his haul of trophies – 14 in nine years, including six league titles as well as three European Cups – was by far the greater. By a ratio of trophies per season, he was arguably the greatest British club manager of all.

But it has arrived just in time. Liverpool are about to clinch the title for the first since 1990, when a squad featuring some remnants of his serial championship-winning side clinched that same crown and the comparisons will be made between then and now; Paisley and Jurgen Klopp.

In many ways, the two do not invite comparison. Klopp’s mighty charisma makes him far more akin to Bill Shankly. Klopp is a manager for this multi-media age. Paisley, whose County Durham accent was barely comprehensible to many of his players, was not. It is highly doubtful that he would have survived the media demands of these times. 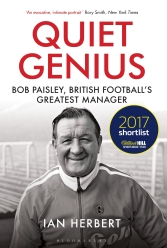 What the pair do share is a capacity to bring the best out of others, a relentless determination for hard work and an ability to listen. A few months back Klopp described standing in the pouring rain in his back garden early one morning, wondering how he had reached the pinnacle he had found. ‘I am stood there in the garden with the dog,’ he said. ‘I didn’t know (how I got here). I know that I am busy. I am interested. I have sensational people around me. And I am really skilled at listening to smart people.’ Bob Paisley would have appreciated that.

Ian Herbert is a staff sportswriter for the Daily Mail and Mail on Sunday and author of Quiet Genius, shortlisted for the 2017 William Hill Sports Book of the Year, available here.

This entry was posted in Football. Bookmark the permalink.
Loading Comments...